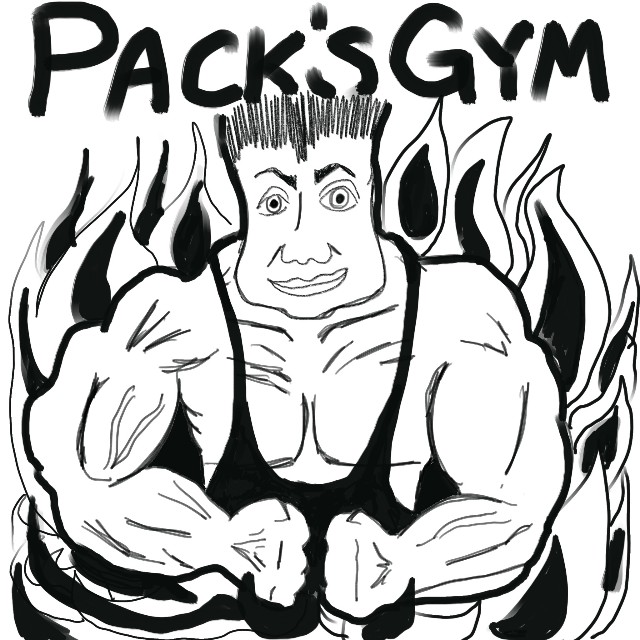 Maxing out at Pack's Gym

The first time I ever maxed out on the bench press, I really underestimated myself. I was in the 8th grade. I put 135 pounds on the bar and nearly threw it in the air, despite the fact that I'd walked in that day assuming I'd have a hard time getting 80. I still remember Ryan, a very popular boy in my class, expressing approving surprise at how easily I'd lifted it.

No one was more surprised than me.

I should set the scene. With some hesitation, I had decided to join a sort of after school weightlifting club at a tiny little weightlifter's gym near my middle school. It was owned by the middle school gym teacher, and he pitched it to the school's boys as a place to go and lift weights to get ready to try out for football next year.

I had no intention of going out for football, so I didn't really think it was a place for me. But then some of the less cool guys I knew joined the club anyway, and they weren't going to go out for football either. They liked it. They thought I should do it.

Our parents paid him. We all walked there after school a few days a week, we threw some iron around and then our parents picked us up. The brave boys went to the bar next door and drank soda afterward. I didn't.

The gym itself was nothing like gyms today. It was 1990 then. This was a shoebox of a gym in a very small town in southeast Kansas. It looked like your classic weightlifters' gym inside. Very stripped down equipment. Lots of metal. Some rust. Chipped paint. The sound system was a cheap boom box on a shelf. The light was dim. Not much in the way of decor. The windows were small. It didn't invite passers-by to look in. This was the gym as church. You needed to know the rites to come here.

The nice thing is the gym teacher had set up a way for young boys to learn the rites, to learn the habits of lifting like big men.

I can't imagine how I ever would have become comfortable in those kinds of gyms if not for that place. When I was in the 6th and 7th grades my friends had been much, much bigger than me. I was the little guy. One time I had lifted weights with my stepbrother and pressed 55 pounds, so I thought that's how strong I was. Why should that have changed? I was not an athletic kid. I was one of those kids picked last in gym class.

Honestly, I don't know why I joined. I think I had read enough comic books that I believed anyone who really excercised could be a exceptionally strong. I probably also thought if I put on some more muscles girls might finally like me. And my friends were doing it.

I'm probably romanticizing the experience, and I don't remember a lot about it really. Hazily, though, I think of it as this place where a bunch of boys I had known for years, boys from all social strata in my class, would meet up three times per week and just pump some iron. In my mind, the social boundaries largely broke down there. Boys who might have picked on me at school treated me like another guy at the gym while we lifted.

The gym teacher let us into the gym for each session and he put a workout plan up on the whiteboard. We'd all work our way through it at whatever weight made sense for each of us. He'd give us advice or help us out. Every few months we'd skip the regular workout though and have a maxing out day. Everyone got three tries at whatever weight he thought made sense.

This was a real event. The coach maximized for safety, but it also made it this rare moment of social cohesion for the whole group. We each went one at a time. Everyone watched everyone lift. Three boys were spotting every lifter (one at each end and one in the middle). After it was over, everyone knew who was the strongest and where each of us fell in the strength pecking order.

At that point, I was just accustomed to being one of the weak boys. I'd only been going a few weeks, and I just worked out with whatever weight the coach told me to. I didn't really think about whether it was easy or hard. So when we started off with maxing at very low weights, like 70 pounds (maybe?), I volunteered to try that.

So then we got up to 95 lbs. This was just shy of 100, which seemed like a psychological barrier, so I tried that. Again: easy.

I had already blown away my own expectations for myself at this point, and I could see on everyone's faces that I had blown away their expectations too. Just in case you aren't a weightlifter: I want to be clear, these are not mindblowing numbers, even for an 8th grade boy. There were boys who were a lot stronger, but this is about how I perceived myself and how they perceived me.

I don't know how I decided to hold off for another 40 pounds; if the coach suggested it or if it had been my own idea, but (as I recall) my last try that first time was 135 pounds. Since it was my third try, it would be my last. But it seemed like a crazy number.

So when it got that high, I got under the 135 pound bar and went to lift it. This time I remember feeling some resistance, but it still went up fast. Anyone could see I hadn't maxed out yet.

That's when I won a kind of approval from my peers I'd never felt before. Somehow, my body had changed and I was clearly kind of strong and they knew it. Not the strongest boy, but I wasn't one of the class weaklings any more.

After that, weightlifting just kind of became part of the backdrop of my life. When school ended, I kept my membership going and went to the little gym and lifted on my own. It was such a tiny place that members just got a key to the building to go whenever they wanted. We paid our monthly dues by sticking a check in an envelope and tacking it to a cork board. But then the coach lost his job at the school and his gym shut down.

But weightlifting became one of those things I was always comfortable doing, the one really stereotypically "manly" environment in which I felt at home. Even if I didn't always keep up with weightlifting, I have always thought of myself fundamentally as a weightlifter. Like if a person can be identified by an athletic endeavor, that was me. I might ride bikes or do yoga or shadow box, but it was all built on weightlifting.

There's been a movement to open gyms that are nothing like my gym teacher's gym, Pack's Gym, but those new brighter, more colorful gyms meant to welcome everyone alienate me. Give me the old school. The heavily used, browned metal. The busted cushions. The ridiculous t-shirts with the drawings of impossible men flexing and leering.

Every place doesn't have to be for everybody for everyone to have a place, and those old fashioned gyms for giant grunting men will always be places that make sense to me.