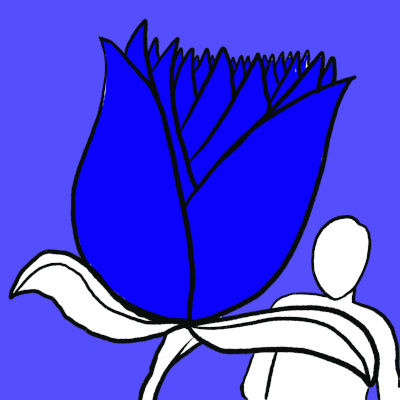 Against the hobgoblin of little minds

Hypocrisy is fine. Even good.

In fact, I will go a step further and say that the whole notion of hypocrisy is conservative. It inhibits change and growth.

Let's imagine we lived in a world that just had flowers everywhere. And our whole economy was based on using flowers for things. We ate them. We wore them. We traded them. We dried them and made them into toys for kids to play with.

We were crazy for flowers.

And blue flowers were the rarest and most coveted. And also they were the most important to the overall flower ecology. Everyone knew this, but still most people messed with a lot of blue flowers.

Blue flowers weren't going to be extinct tomorrow or a week or a month or even a decade, but we all knew that if everyone kept using all the blue flowers they wanted to use, we would run out. That would be bad for all of us.

And also not fair to the blue flowers. And we really revere flowers in this world?

Okay so this ethic starts to grow and for a long time it's the really far thinking, progressive, hippie types who are careful around blue flowers but eventually other folks start to see their point.

One day a guy, let's call him Justin, says: You know what, I don't think we should consume hardly any blue flowers.

So Justin's on board. At work Justin used to be a real blue flower Thursday kinda guy, but Thursdays start to come and go and it's all green and yellow and red flowers for Justin. He really does it.

But you're extra good work-friends with Justin and you're also a no-blue-flower O.G. So one day you get invited to a flower-b-cue at Justin's place and when you get there the place is very much decorated in blue flowers. Especially the centerpieces. The centerpieces are blue flower AF.

So you want to call Justin a hypocrite, right?

And in the purest sense of the word, he is. On the other hand, Justin has demonstrably lowered his blue flower consumption. Further, he talks the talk of blue flower abstinence, which itself provides a stronger social latticework undergirding the growing blue flower abtinence consensus.

Even if some of them are hypocrites.

In fact, the frequency of hypocrites may itself be a sign of progress.

So that's why I'm against the notion of hypocrisy. Hypocrisy reflects a person whose ethics have started to evolve ahead of their willpower and behavior. And I think that's how it has to work. How many people out there do you think become avid recyclers first and then later learn about waste? That's just not how it works.

But when we punish people for so-called 'hypocrisy' we are discouraging change. We are putting a new obstacle up and making them inclined to say: this ethic is just too hard, and I can't do it.

Hypocrisy is fine. Hypocrites are evidence of progress.