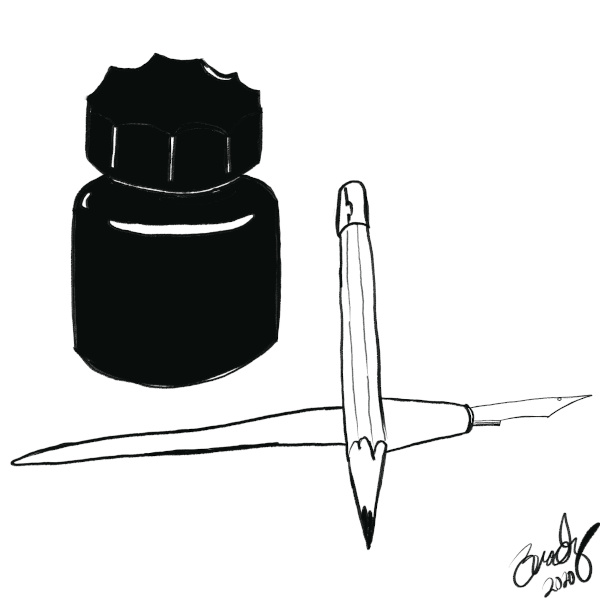 I am not a great artist. I can draw just well enough that if I show someone something I have drawn, they say: Did you draw that?

My drawings are just good enough to sort of surprise people a little. I don't think this is a difficult level to attain. I honestly believe anyone can get there.

It makes me crazy when people say with complete certainty: "I can't draw," because you definitely can. If you have one hand and one eye you can definitely draw. And there are people who have done it without either of those.

So stop it. Stop that narrative. If you don't want to draw, then just quit reading this and own the fact that you're not interested in it. If some part of you has always kind of thought it would be neat to doodle a bit more, keep reading.

Because I can kind of draw and I have done a lot of it, I thought about what I've learned along the way that helped me get better and I thought I'd write it down:

Get out of your own head

It is tempting to make this the whole post. This is the beginning and the end of it all. Most kids draw at least some as little, little children. It is elementary school that teaches us not to draw. Some kid is better than the others and he gets a lot of praise. Other kids get told that everything they are drawing looks like garbage, and they never draw again. It stinks.

I don't see anything until I've drawn it. Not really. When you draw anything you see it in a whole new way. You realize how much you hadn't noticed. This really is the sum total of drawing.

Drawing is learning to see.

When most people who feel they can't draw are forced to draw, they look at whatever is on their paper and think about how it doesn't look like whatever it should look like. That's the wrong place to look, though. They should be looking at whatever they are trying to draw.

Don't look at your drawing. Look at what you're drawing.

If you're trying to draw something in your own head, that's really hard. Look at it inside your head as much as you can and you will realize that there's more missing than you thought. Don't hesitate to model something in real life to draw most of whatever it is you're seeing in your head.

Embrace however your drawing turns out

The task of drawing something in the real world is taking a three dimensional thing and flattening it down. This is harder than it seems. But it basically comes down to making details line up correctly. Still, you will think you have everything lined up right and then notice it is off in some way.

Learn to just work with that. Once you really start to draw what you see, you should then learn to roll with it when you get it wrong. It doesn't matter.

Recently I was drawing some bottles on a shelf. I thought I was crushing my spacing. Then I realized there wasn't enough room left. So I just didn't draw a couple bottles. It was fine.

This is the hardest thing. This is where I am trying to grow, personally, as a draughtsman.

When I look at a drawing that really impresses me, a lot of time I'm trying to see the tricks they pulled to simplify something complicated. Go look at any mechanical object and then try to draw it. You will learn that in your head it is much simpler than it is, in fact. Once you really look you will see that mechanical things are very complicated. Ideally, you'd still be able to draw that simple version in your head, because you know what it is. But now that you are looking at the real thing it's really hard to figure out which details are essential and which ones can be smoothed over.

Learning what the viewer needs to see is an advanced skill. In other words, drawing well is learning to leave things out.

We recognize things by their edges. An art teacher told me this about faces. Most of our recognition comes from the external shape of the head, even though as artists we want to obsess on how the eyes look.

This is true of almost anything. Our brain processes outlines first. Get the silhouette right and the other parts will fall into place.

Decide what you really want your viewer to see and draw their attention there, either by placing it in the center, adding a lot of detail, making the lines thicker. Whatever. But tell people where you want them to look.

If you think your drawing is missing stuff but you can't figure out what, just add some shading and/or cross hatching. It tricks any non-expert viewer into seeing it as "detailed" and details are impressive. It's easy to do but makes it look like you worked really hard.

It's about where the lines meet, man

I got this from a book by cartoonist Dave Sim, called The Cerebus Guide to Self-Publishing. It's one of those things that I don't know how to explain but the more I've drawn the more I've realized it to be true. Drawings make sense because of how lines meet up. If you're going to be careful about anything, be careful about the spot where the lines meet each other, where they adjoin.

A good way to make a drawing look solid and finished is to do it in ink. Usually, to make something come out well, an artist will draw it in pencil first, then draw the inks over the pencils, then erase off the pencils. Sometimes I like to use a lightbox. Draw pencils on one sheet of paper, tape it to another (usually thicker) sheet and then ink it on that. It makes it really clean.

So definitely do that.

But also sometimes go straight to ink. There is something dangerous and freeing about it. It also really helps embracing however your drawing turns out, which is also key to getting out of your head.

Which brings us back to the beginning.

Notice not a single one of these points are about specific practices or how-to guides. Those things get in your head. It's not what we're going for here. These guidelines if followed and practiced and meditated on will be enough to take you a long way. They are enough to enable you to find your own voice within the space where ink and graphite adhere to paper.

So please don't say you can't draw. That is irresponsible talk.

Maybe you don't want to draw, and that's OK. If you don't have any desire to draw, then just say that. Say, "I've never really been interested in drawing." Cool. I can buy that. Me? I have never been that interested in learning to sing well. I sing off key. I don't care, at all. If someone came to me and said I'll give you $1,000 right now but you won't be allowed to ever sing again, I would ask: Where do I sign?

But I don't say I can't sing. I bet I could learn to get better. But I will say I don't really want to. That's fine.

But when you say "I can't draw" you are being unkind to your fellow man. There's this consensus out there that drawing is very hard and very technical and requires rare talent and it prevents people from taking a shot at expressing themselves.