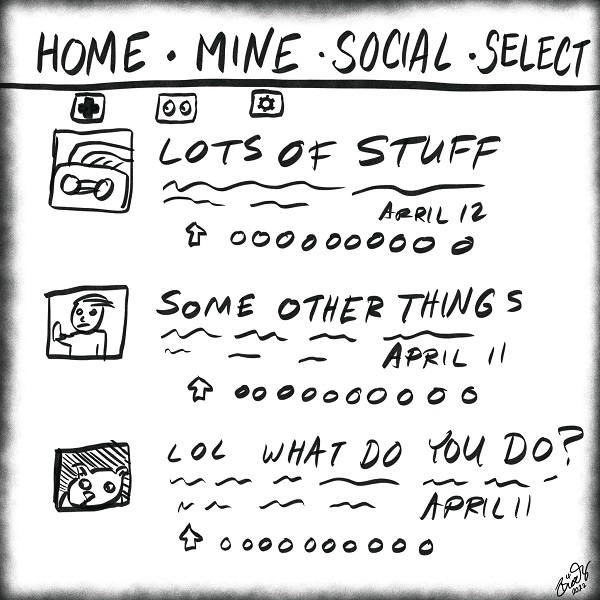 A news aggregator for a galaxy brain undazzled by virtue fireworks

A lot of people miss Google Reader, but several companies have tried to build applications that imitate what Google Reader offered without ever really nailing it. Maybe it's time to start somewhat fresh and build something that does what Reader did well, while also drawing on some of the lessons learned in recent years. Plus innovating a little.

And so, I propose, a new news aggregator.

The point of this aggregator would be to create a site that has just enough social for you to take advantage of the hive mind but limits it enough to undermine the performative incentive that make social a cesspool of toxicity and virtue fireworks.

The business intent would be to build something that's a public service. More a "stayup" than a startup. Something that can stay quite lean, too.

So I am going to describe a design. Not a design in terms of how it looks, but in terms of its basic user experience. I'm going to do it with words because, well, I use words.

Here's the short version: It's a news aggregator that lets you see what people with similar interests and sensibilities are reading. Comments on the service work more like a group text. Identity on the site bends more toward Wikipedia and less toward Instagram. It's a site much more about text than pictures. It's not at all about video. It will never pivot to video.

It would be a news aggregator that's social but it isn't needy. So here are the key points about it. I have sketched these out in even more detail, then I realized it was too much for this blog post. So this is the simpler version — if you're curious for more, let me know. Here we go:

We all know that a variety of other factors that have nothing to do with people's curatorial brilliance determine prominence on social sites. So a few more design elements:

Hit me up if you want to build this. I don't know what I could do substantively but I'm not a bad hype man.