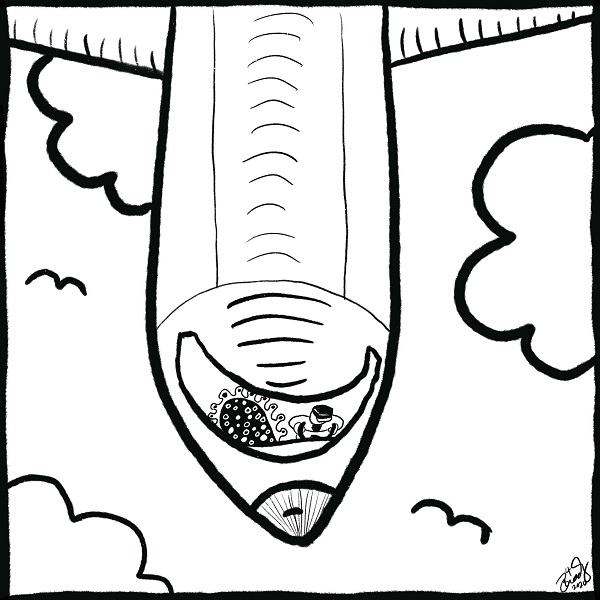 Being with the world of calamity

Russ Roberts and Tyler Cowen are two of the best known popular economists. In mid-March, the two got together over Zoom on Roberts' podcast EconTalk to take a look down the road of COVID-19. After talking about very men-wearing-suits sorts of topics, such as regulatory capture, incentivizes for innovation and the word "bailout," Roberts asked Cowen to make a forecast for how the world will change culturally, and the conversation took a turn:

Tyler Cowen: I think there will be a huge wave of promiscuous sex once there's the first break in the virus, for instance.

Russ Roberts: There goes my G-rating on EconTalk.

Though it came out weeks ago, I heard it only yesterday and it took me back. My mind was in roughly the same place as Cowen then, which seems like so so long ago.

In March I thought I was clever for predicting that there would be a precipitous drop in total birth rate. See, lots of people were making wry comments about how many babies would be conceived in quarantine because couples stuck at home together would bang to pass the time.

Folks thought they were so funny.

I predicted that those two things would prove more important than all the very married screwing. I guessed that people would use depression-conscious protection and that the novelty will wear off pretty quickly, as it does.

I was being contrarian! And crass! Go me! So clever. So clever.

So that was me in the two months or six weeks ago range. That's where I and Cowen's heads were at then.

Now I just want to understand how to be.

I had a pretty moralizing post I wrote and never published a few weeks ago called "Why I am not going jogging." It took a very strong stance for isolation and etc. etc. Like I said, I never put it up, because it gave me the gitchy feeling.

On Saturday morning I went for a walk. It was the first time in 45 days that I had gone outside just to be outside. I've been to the dentist once. I've gone to the grocery store a few times. That's really it. But the walk meant my stance had shifted, some.

Things are changing. We are starting to adjust to the reality of this thing just being with us for a good long time and we are figuring out how to be. The risk calculation of everything is going to be recalibrated over the rest of this year.

Real talk: If the economy re-opens people will die. This is true. But preventable death takes a backseat in calculations made every single day. If one death were always too many no one would be allowed to drive cars.

There's an opposed entrenchment along partisan lines now but a middle ground consensus is going to emerge around living with COVID-19. That or the nation is actually going to break up. For the first time I'm starting to see the sort of brinksmanship that really could indicate weakness in the state of the union.

But most people don't have the luxury of interfacing with macro issues right now, so that's just a piece of what I mean by how to be, and it's not even the most urgent piece.

Right now what I hear people talking about is how to be with themselves and their tiny worlds. Whether it's giving people permission to flick off their ambitions while stuck inside or experimenting with what non-scientist scholars can foresee in this crisis. The word "unprecedented" is getting thrown around a lot. I think commentators are misspelling "depressed."

This is a momentous time and historic eras feel terrible. Wisdom unravels in such long days of doubt. Calamity preys on our worst insecurities. And for all the epic change that's underway, young people today will have little to tell their grandchildren about it all, because they won't remember very much of what happened.

Events will blur together in our minds over time. I feel like they already have.

When I try to write things down, all my memories look the same. Events mainly occur between my ears. What is there to say?

I started this situation the way I start every situation: leaning on my cleverness. My cleverness has gone wobbly. I feel fine, but I think that might be because I know how to be fine and — for want of a more optimal way to be — that's the one I'm going with.

I don't know how to be right now, but "present" is usually the right answer. With life in a phase shift I'm not sure present is right. What is now, after all? A crossroads is auspicious but it's also roughly nowhere.

Philosophical Salon published this post by Farah Abdessamad, who just arrived in New York City, only to get locked inside. That's crushing. Those first few flushing months living here are better than the start of any romance. And she's missing it, instead writing an essay reflecting on Heidegger and his reflections on how humans reflect:

"Through unsettling experiences, we acknowledge our being. Anxiety is not problematic per se but paves the way towards freedom. Why? Once we understand Dasein [the conscious experience of being a living human] and chiefly its finitude, we can accept our being-towards-death and direct our Dasein and being-with-the-world."