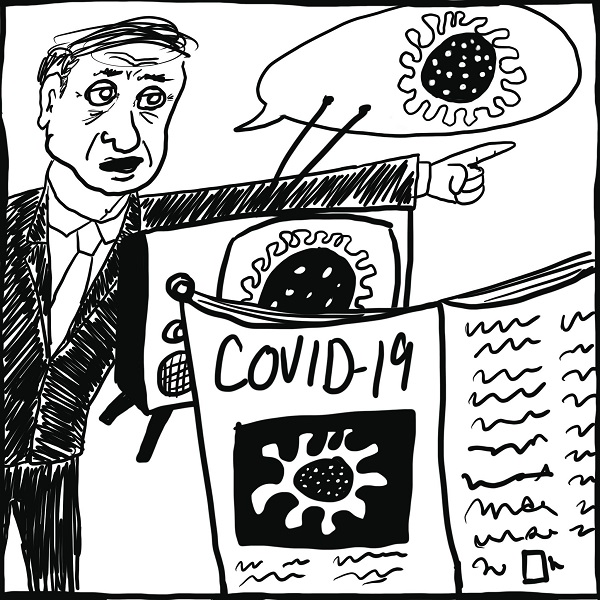 It's not just your map, COVID-19 moved the ground around

Recently I was asked to read the last chapter of Hannah Arendt's The Origins of Totalitarianism (1968), in which she makes a strong argument against logic as a way of knowing a nation:

"The only capacity of the human mind which needs neither the self nor the other nor the world in order to function safely and which is as independent of experience as it is of thinking is the ability of logical reasoning whose premise is the self-evident. The elementary rules of cogent evidence, the truism that two and two equals four cannot be perverted even under the conditions of absolute loneliness. It is the only reliable 'truth' human beings can fall back upon once they have lost the mutual guarantee, the common sense, men need in order to experience and live and know their way in a common world. But this 'truth' is empty or rather no truth at all, because it does not reveal anything."

This quote comes at the end of a long chapter in which she describes how totalitarian states are justified by logic and protected by driving their people apart, making them alone. To say that this was a striking observation to read as we were all being admonished to stay inside in order to flatten the curve under a president prone to favoring the worst tendencies of populism is an understatement.

But really the larger point here is: the way people know things is important. People make sense of things together. That's what works best, in her view, because we all have to make this world together. You can make a state from a set of basic assumptions and logic it out from there, but the trouble starts once you introduce a few actual citizens.

How we know, that is, epistemology, is a critical part of any democratic or republican process. To decisionmakers, the question of sources of knowledge is nearly as important as the partisan stances of his collaborators in statecraft.

Said in practical terms, how can a leader (or citizen) make a reasonable guess about policy outcomes or even understand what the known facts on the ground are. It's a beautiful day here in New York City as I write this. Outside looks as nice as every other spring day I've seen here. I'm told, however, that I am still in a hot zone of a global pandemic. I know this from reports made by those close to it, masks on faces in the street, closed storefronts and also the evidence of sirens heard through my windows. Most evidence, however, speaks to a world much as the one I am used to.

Yet I believe this larger reality is true and have acted on it for 60 days now.

Such questions are even more complicated for leaders. They are multiple levels removed from the many, many facts on the vast array of ground they are responsible for, and yet they very much need to know what's going on there. How one leader or another architects his mechanism of knowing his domain may be one of the most important and least visible decisions he makes.

After knowing, comes action. America is an a complicated state of setting its next course of action now. As a people, we have lost the plot. There was, from where I sat, an astonishing consensus that formed around the notion of flattening the curve. Then the trade-offs started to hit and suddenly that consensus started to weaken.

The expert class has continued to push for the curve to be flattened, but they have not done a good job of justifying the continued flattening in light of the now apparent trade-offs.

The blog Nec Pluribus Impar published a rambling and largely incoherent post about this controversy, which I only found because it was linked by uber-blog, Marginal Revolution. Due to the source of recommendation, I muddled through and found a valuable point running throughout. The post may have been aiming to achieve more, but this alone was enough. It's an obvious point and yet one that you realize is under implicit attack right now.

The blogger writes that wherever a person stands on re-opening the economy and how, she should understand that "this is a political opinion and not a scientific one and they have a responsibility to make that clear."

In practical terms, that means the decision will be made by experienced generalists acting largely from a calculation of electoral allegiance.

Yet these days it seems that the writing/reporting class is beating the drum of deferring entirely to the expert class, but at the scale and novelty we are acting at, none of them really know. A great investigation into pandemic history in The New Yorker quotes Adam Kucharski, an epidemiologist and author, who said, “There’s a saying in my field: ‘if you’ve seen one pandemic, you’ve seen . . . one pandemic.’ ”

So experience is no guide and the expert class has left the public confused at this point. They gave bad advice on masks, 20-somethings are getting hit harder than they were led to expect, kids seem to be less safe than they seemed and there's this whole weird thing with smoking. What? And that's just the health stuff. There has been an inadequate conversation about balancing actually living life alongside preserving it, at least from a place of authority.

The course of discourse

The public has been confused to a point of stagnant paranoia, which is a bad place for epistemology. And so through a broad nationwide conversation they have come to something like a vague consensus (or at least those who have come to a consensus have come to agree on a message: Open up).

Robin Hanson at Overcoming Bias wrote a post saying that the public's vague but consistent press to open the economy appears to be winning because its foil, the elites, can't agree on next steps.

One way of understanding Hanson's post is by saying that they think they know what the costs and risks are and have decided that they would rather face the risk than continuing building up cost.

While the elites don't know what they know.

One way of interpreting this was articulated all the way back in early April, ancient times, when Canadian writer David Cayley used the past writings of his friend and theological philosopher Ivan Illich as a means of understanding the crisis. There is so much richness here it's extremely hard to sum it up, but it takes us back to the Arendt quote on some level.

The state is asking people to view themselves through the lens of risk, as a sort of Schrodinger's Cat within a set of probabilities of liveness and deadness. And though the elite reverence of science has become something like a state religion, that faith has not quite made its way out to the masses.

Cayley writes of the present state sanctioned religion of science as follows:

"The primary duty of people is to conserve and foster life. But this is not the life which is spoken of in the Bible – the life which comes from God – it is a rather a resource which people possess and ought to manage responsibly. Its peculiar property is to be at the same time an object of reverence and of manipulation. This naturalized life, divorced from its source, is the new god. Health and safety are its adjutants. Its enemy is death. Death still imposes a final defeat but has no other personal meaning."

Yet members of the public know that they are unique, individual humans living in particular circumstances. Instead they argue that they would rather make their own risk reward calculations, but to do so in a context where there are potential rewards (such as hourly wages) to be attained should they choose to seek them.

The rowdy, gun-toting, camouflage sporting public has used an alternative approach to knowing, something more like a democratic way of knowing, one no doubt heavily informed by dubious sources of information but nonetheless arising from a discourse rather than from spreadsheets and talking point memos.

Cold logic is not adequate when things are hot, urgent and strange.

Tomorrow will mark two months since the World Health Organization declared COVID-19 a pandemic, and yet the elite messaging around this crisis has moved very little from these two points: "Curves, flatten them" and "18 to 24 months for a vaccine."

Tech and crypto entrepreneur Balaji Srinivasan has risen to Twitter fame for being early and opinionated on the virus from Wuhan, China. He has been using his growing platform to help people with sense-making as the crisis proceeds. Yesterday he articulated three broad stances that the United States could take in a Twitter thread that started by describing how tracing and tracking has worked in South Korea.

Upon deliberation, that means there are three options. 1) The total state: sacrifice privacy to control the virus 2) Market anarchy: preserve privacy, but don't control the virus 3) Superior technology: develop biomedical tech so good the virus and any successors don't matter

These are each defensible positions, but someone with an honorific needs to better articulate consequences of each, inclusive of health and society, so that people can wrap their heads around each option.

No one can know for sure what will happen from each, but a reasonable story needs to be told not just about lives but living.

It's been interesting for me to watch my own sense of knowing change. Intellectually, I don't believe it is worth it to be out there much. Anyway, there's no museums to go to out there and Whole Foods wouldn't be fun anyway so what do I want to go outside for?

My calculations, I'm willing to bet, don't look much like yours. Which is fine. We are both particular beings, not a set of probabilities.

But in terms of my personal epistemology, I don't feel fear like I did, which has been curious to observe. I don't think my odds of catching it are much diminished, though perhaps our healthcare system is somewhat better equipped to look after me, but there's a level on which my bodily understanding seems to diverge from my intellectual one, and I think it is because of subtextual messages I'm getting less from the facts in the discourse and more from its shifting tone.

Venkatesh Rao, the primary writer of Ribbonfarm, summed this shift up in a pair of of incisive tweets:

1. Weird how people are letting their guard down. My guard level is steadily trending higher. Risk seems to be increasing steadily rather than decreasing to me.

2. Map people: “things must be getting better because they’re easing restrictions, so I can let down my guard”

It is normally pretty hard to tell the difference between the map and the territory. Mapmakers have a strong incentive to make accurate maps. But how do you know what's there when the ground moves beneath your feet?

One method is to get out and have a look over the horizon. Another is to find everyone who went and ask them what they saw.

For a reverse chronological timeline of how different thinkers have discussed the pandemic, check out this page, which updates frequently