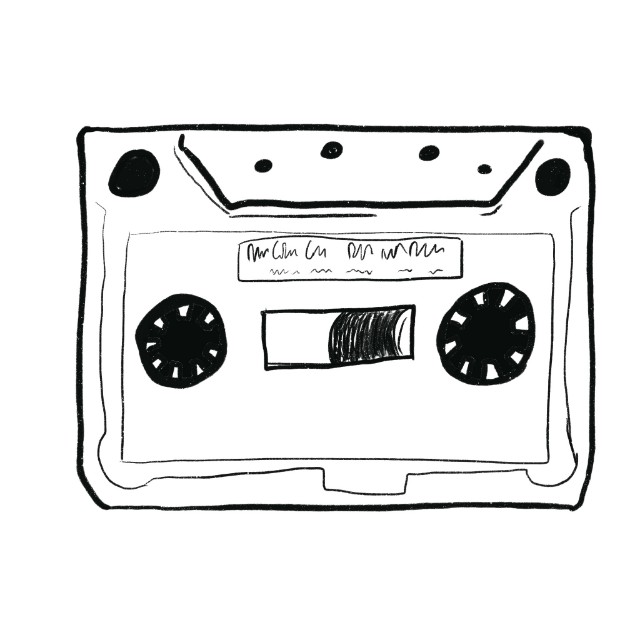 Cognitive load and picking out a song

When I was in the first grade I got my first LP album (Michael Jackson's Thriller). Not long after, I got a tape player. My mom called it a "boom box" and some people called them "ghetto blasters" then even tho no one where I lived really had a clue what the word "ghetto" meant. It was really just a cheap stand up tape player.

I bought a lot of tapes but my parents didn't rush to get me a CD player. I didn't have my first CDs until, strangely, my parents got me a kind of OK personal computer. I was in the 10th grade. Other kids had had CDs for years.

(I am pretty sure I remember what my first CDs were: The Breakfast Club soundtrack and The Joshua Tree by U2. Or maybe it was Boy?)

I've seen a lot of music formats, and I've thought a lot about the pro's and con's of them as they've changed. I've always had a hard time with the notion that the medium is the message. I watched With Honors in high school and it made me cry. I watched The Frighteners and it didn't. I saw both on VHS, so I guess the message was also kinda the message, huh, Prof. McLuhan?

But here's the thing: I've been using different formats long enough to appreciate how they change the experience of music. It's made me wonder if the evolution to increasingly digital formats isn't sort of pushing us to this world increasingly dominated by a few mega-stars. Even without the companies distributing music doing anything particularly nefarious.

But hold that thought.

First let's talk about the transition from tapes to CDs in the car.

Seriously, fuck Carnegie Hall. If I want to get into a song so hard that I'm living it give me a blue Ford Focus with the volume cranked any day, any night... any lifetime.

When I had my 1985 Oldsmobile Cutlass Supreme to cruise around Southeast Kansas in the 90s, I played a lot of tapes. My car seats were littered with so many tapes. They Might be Giants. Billy Joel. Soundgarden. Metallica. The Pretenders.

Tapes were fun because you never knew where they'd start. When you popped a tape out, it might be at the end of a song on the side you were listening to or in the middle of a song on the other side. When you plopped it back in, you didn't know what side you were popping it in on. Most car tape players in the 90s could play on either side so it didn't matter. You weren't putting on a song, you were putting in a tape. You never knew what part of the album would be where you started.

But the compactness of CDs had its benefits in the home, at least for a hardcore music fan.

I didn't rush into the switch to CDs. I never really saw a huge advantage in the format, to be honest. Was the sound really better? They got fucked up very easily (of course tapes did too). Then in my 20s and they started making some pretty remarkable devices: jukeboxes for the home. I would ultimately go through two of these babies, but the first model I got was definitely the best.

If you never saw a jukebox for the home, they were these big boxes that held hundreds of CDs upright inside (I don't think I ever met anyone else that had one). You would play a CD by selecting its number. The first one I had could hold 200 CDs. It also had a great feature: you could make every 25 CDs a "genre" or group and shuffle within that group. So I had a metal genre and an indie rock genre and a cool girls genre. It was a great way to hit a mood but also have variety.

Then I bought one that held 300 CDs and it had a lot more functions but most were too big of a pain (like, you could connect a keyboard and type in all the CD names, but who was really gonna do that?)

This part of the story is what gets us back to my point here: about cognition and music. For the jukeboxes, what you'd do is make a catalog of the CD covers. You would put them in CD binder and number them according to where they were in the jukebox. Then you could flip through the binder and say: I want to play 182.

Cognitively, I found flipping through those paper pages to be really helpful for deciding what I wanted to listen to. My brain knew those album covers. It didn't have to remember details about every song I liked on its own. It had an anchor image to work with to help it find the necessary mental file and assess it against my mood at that time.

When I finally got an iPod, it was great because I could hold so much music in such a tiny space plus PODCASTS. Wow!

But I also found the work of deciding what to listen to be much, much harder on an iPod. Mostly I was scrolling through long strings of text and the text just was not jarring my brain in the same way. Plus you realized that just reading a band name is a lot harder than just glancing at an image. It was a lot of work to read all those words quickly and I found myself just settling the words that were the easiest to recognize/the most familiar

[[Yes Apple mavens: it did have a sort of album cover shuffle feature, but this did not work great, especially if you had ripped a lot of albums.]]

A lot of times deciding on something to listen to was every bit as hard as engaging in a brainstorming session at work. I'd try to get myself to remember cool music I knew I had but I'd kind of forgotten about.

As I shifted to acquiring music digitally, rather than having a physical object, it became more difficult to even remember what my library contained. But that didn't stop it from growing. Every now and then my eyes would land on a name and I would read it and it would jog a memory and it would be a cool moment of rediscovery, but mostly I'd just lose new music in a mental quagmire.

But hey: at least I had that string of text.

Now, the main way I really listen to music is at home with my HomePod. Look, I really like my HomePod. It tells me the weather. It sets alarms. The music sounds nice (very nice). I'm probably going to get another one and make it stereo.

When I come home at night, it's a nightly brainstorm to figure out what sort of music my mood speaks to and what band might kind of fit it. The bands that have been with me the longest are the easiest to think of, but there's a part of me that's hungry for something a little newer.

I don't know about you, but I develop relationships with certain albums. There's albums I may need to listen to 100 times before I find something in it that I really like. Before I find the THING I like. Before I even understand why I like it.

I think everyone agrees that Black Sheep Boy is Okkervil River's best album, but I probably listened to it 200 times before I understood why I kept playing it. I probably played it 300 more times before I realized that "A Stone" is my favorite song in the whole damn world.

I never know if I'm going to have a breakthrough like that with an album. You just got to put in a bunch of listens and see.

But standing there before my little portal to Siri, it's always quite hard to come up with some band I'd really like to hear specifically at that moment rather than just the bands I think about most often.

It's just natural for your brain to take the easy route and return the names of the top few bands you tend to play. For me, these days, the natural, obvious choices are The Decemberists, Camera Obscura, The Pretenders (still), The Black Keys and also Blondie.

But Blondie is a great example here because I'm not really such a Blondie fan but somehow I have come to associate playing Blondie with listeng to music in this particular living room using a streaming device (it started with Pandora on my smart TV, until I got a HomePod). So this Brooklyn living room has become what the album covers once were in CD days, but only for one band.

The other thing I can do with HomePod is just say, "Hey Siri, play something I'd like" and Apple just generates a playlist for me, which usually works okay (though Apple is really convinced I love Smash Mouth for some reason, and I do not, tho I did listen to them some a decade ago in the iTunes mp3 era heyday). Again, I do this because it's a low cognitive load.

But my point is that the cognitive load of finding music you like is just harder with digital music and the more abstracted from anything physical it gets the harder it becomes to remember the breadth of your music tastes. I don't think apps like Spotify are much better, since those really prioritize trying to feed you new stuff constantly.

Apple and Spotify haven't shown me their books, but I suspect that it's that heavy rotation with users where the money is.

And in this new world the bands that are the easiest for us to find cognitively are the ones who are likely to do best. Maybe that's why Beyoncé has achieved a nearly deity like status in the present world. There's no other artist (as far as I can tell) that gets name checked more, so if you think "music" you are very likely to think "Beyoncé," especially if you are someone who likes music but is just sort of happy to listen to what the zeitgeist and your tribe is into.

Why not? It's a low cognitive load.

In this world where every new listen is a bigger cognitive lift than just flipping through some physical objects, it may naturally tend to make the most popular stars from superstars into megastars. With fewer just big stars and those big stars crowding out a lot of other players.

It's just a theory, a framework for thinking about music as technology changes. It's not nostalgia. Tho I do miss popping a tape into my car's tape deck and getting surprised by where it begins. Siri can do a lot of things, but she never starts a song right before the hook.