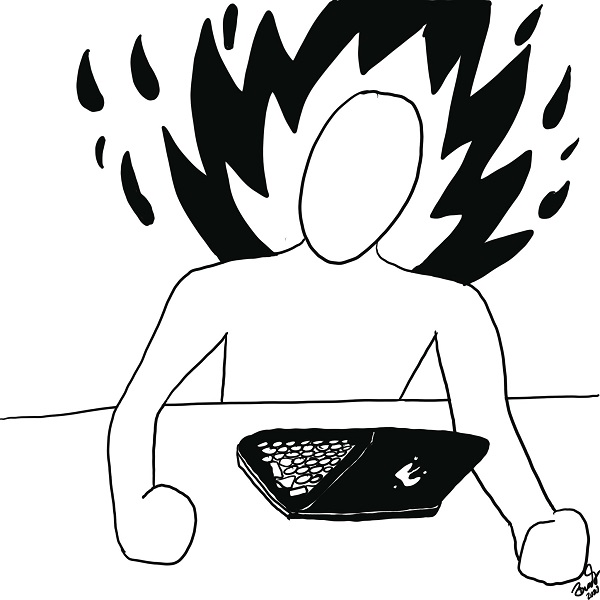 The Internet of Beefs, Brought to You by Kayfabe

All I can say is I hope you aren't a mook. Are you a mook?

Let's assume you aren't a mook. Anyway, I'm going to take a pass on any chance that this post becomes popular, even though I think there is something to it. I'm going to pass on it because I can't conceive of a way to do it that would not completely shut out roughly half the people who should see it.

I'm going to write about the ways in which people are crazy in the culture wars. The way to do it and make this thing pop is to start with an example, an anecdotal introduction. The trouble is any introduction I chose would have to come from a side in the culture war, which would tinge everything else

So the only anecdote I'm going to open with is the anecdote of this conversation that occurred inside my head, and I'm only showing you the ending, and that probably dooms this post to obscurity.

But so it goes.

I'm going to assume that you are a person who cares about things in the world. Who believes certain things about the fault lines in our culture. And hopefully you're a person who isn't sure what they believe about some other thing. Like you know you are generally on one side, but sometimes the people on your own side seem a little crazy, too.

If that's not you, if you love the fight, then you're a mook. This isn't for you.

OK, so now I'm going to ask you to do a bit of work for me, I want you to try to call up a memory. This is going to be hard, I know. Asking other people to do cognitive work isn't fair and it doesn't make reading fun. I'm sorry.

Believe me. I know how hard it is. I hate looking at my iPhone and trying to think of a band I want to listen to. This is much harder.

Something that hit close to home in some way but missed the mark in a way that it's fundamental wrongness left you furious. The key thing here is it needs to be some argument someone made. Some essay or take or even just a tweet.

Not an event. Not an act. Think of a proposition someone made about the world. And it's maybe even better if it was a perspective on a side that you generally agree with, but this was just too insane.

Got it? If not, take your time.

Maybe just try to call up that feeling of being frustrated and locate it in your body and then see if that doesn't jog a memory.

Maybe you have something now?

The Internet of Kayfabe

OK, now I can get to the point. Keeping your example in mind (I know mine!), could it possibly be an example of kayfabe?

I think its still able to tap into something visceral for its fans because some of the most shocking things are real. When The Rock slams Mankind over the head with a steel chair, that still really hurts. There's no getting around that hurting.

So because the audience sees that and thinks: "there's no way that didn't hurt" (because it did), everything feels real. But it's not real because Mankind knew the Rock was going to win before he ever entered the ring. But it only needs to feel real, anyway.

But that's not all that makes it kayfabe. The real core of kayfabe is that no wrestler ever admits that it's not real. Embracing the work (any planned hustle) at all times was seen as core to the business. You never broke kayfabe. Any time someone recognized you as a character, you were in character. That's kayfabe.

So ask yourself, is there some chance that the interpretation of real life that you're reading might be a work. Like, maybe the person general leans in whatever direction they are representing, but when they take it to extremes, could it possibly be that they are just doing that because it's good for business?

The Internet of Beefs

A post came out recently that I thought was really good, The Internet of Beefs on Ribbonfarm. In that post, Venkatesh Rao lays out a way of understanding the vitriol online that makes it all make much more sense.

It also gives you a lot of permission not to, well, take your side's side.

It's a great blog. In fact, my last post was about Ribbonfarm, too, now that I think about it. Anyway!

A select group of these people actually make their living off of driving drama online. They run podcasts or YouTube channels or they sell ebooks. Whatever. But they need to keep driving attention to themselves to keep the business going.

The knights are powered by other online denizens called mooks. These people are not paid, but their identity or their entertainment is tied up in following whatever the knights doing. The more mooks a knight can accrue to themselves, the more powerful the knight becomes. There's a whole economy to it.

A mook can easily mook for multiple knights of course, but the point is that they want to be in battles. The point for knights is to drive battles with other knights of the other side. There is no winning. Everyone understands that. No knight even wants to win, not really. Winning would end the battles and the battles are what pay the rent.

This is why it is kayfabe. Professional wrestlers' incomes depended on not shooting the work, in keeping the fans believing it, to always be closing the con.

That said, in the post, Rao acknowledges kayfabe, but he dismisses it as an explanation. I think that's the only thing I really disagree with about the post. In fact, I think his overall argument only augurs more strongly that for certain key leaders in these beefs, have to be driven by kayfabe.

It makes so little sense, that kayfabe is the only thing that makes sense.

And look it honestly doesn't matter if people really believe the work or not. It's kind of beside the point. There's something about a fight that entrenches a person.

I once knew a young woman who stumbled into a surprisingly high position in policy battles around a certain hot button issue. She was a committed adherent to a certain side of hot button fight. When we met though, I could see that she basically fell on the reasonable side that most normal people in middle America who took her side would agree with.

The longer I knew her, though, I could see her drifting to the more and more extreme side of her side. Early on, she was doing her job. It was a work. It was what she had to say. Later, she couldn't so much tell the difference between what she had to say and what she would have said before. After all, her job literally depended on it. Kayfabe was wired into the system.

There's nothing that will make you believe something like your car payment.

It happens in professional wrestling too. Sometimes guys play the character so long they don't know how to take the mask off any more. It starts feeling real.

But that doesn't mean it wasn't a work. It was a work from the jump.

So look were does that leave us? Here's what I think. My stance used to be that I just didn't engage in the craziest debates. I don't know about you, but the ones that tempt me the most are the ones that I spiritually largely agree with, but that get taken to insane extremes.

I have studiously avoided these fights. I have let the mooks rage on as the knights rake in those views.

But I'm starting to think it might make sense for those of us who are sick of the sham to just start breaking their kayfabe. To start saying: this is not a thing that real people on this real planet believe. It's not even a straw man. It's a blow up doll. It's a sex toy for the culture war fetishists.

And all of us normal people out there should star pulling out our rhetorical pins and popping them.

When I started conceptualizing this post, there was something people were talking about online that was getting a lot of hate-reads on the internet (but also a lot of amens) I was going to use that example to ground the post.

But then I read the thing again and despite its faulty logic and wild conclusions, I realized that there was just a fundamental sadness at the core of this young writers' search and I just couldn't bring myself to single it out.

Even though I think they've all gone mad.

But, have I contacted that writer and told them I think they are pulling a work? No. I haven't done it yet. I don't have the guts. This stuff is really hard to address, even when you're pretty sure it isn't real.

But anyway you don't have to confront any body. That's really just a challenge I'm making to myself. Just don't be a mook.